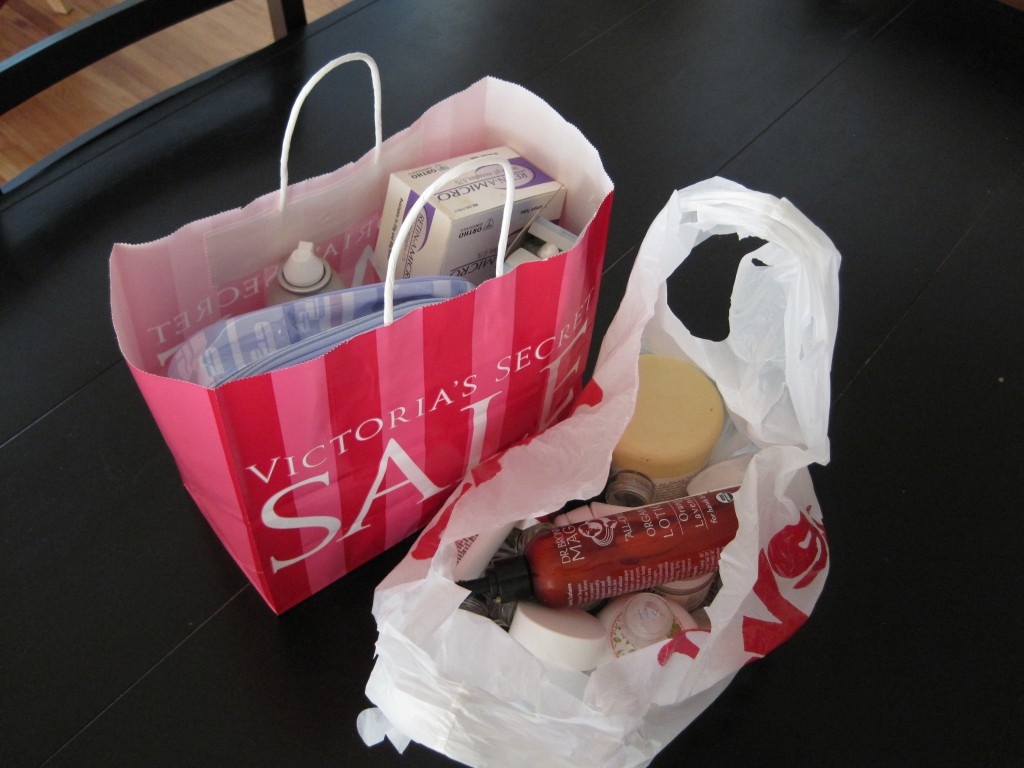 It’s spring cleaning time, and if you’re anything like me, there are a lot of items that you’d like to give away, but it’s not as simple as loading the car up for a trip to Goodwill.

This is what happens to me when I go through closets, boxes in the basement, my office: “I know I was saving this magazine for something, I’ll have to put it aside and see what it was…” or “Maybe my niece would like this bracelet that I haven’t worn in twenty years” or “I didn’t like this shampoo, but one of my friends might…”

You can see how this doesn’t exactly make decluttering projects easy. Sure, the quickest way to get rid of stuff is to toss it in the trash. But most stuff IS usable, and I don’t want to send anything to the landfill that might be useful to someone else. So decluttering can be a much more complicated and lengthy process when you’re concerned about where all this trash is going.

1) If you’re ready to let go of something, put it in a box or an area you’ve designated as such. Don’t mix it back in with your current wardrobe, etc.

2) Hold clothing swaps. That super-cute top you just love but never wear might be perfect for someone else.

3) Baby steps and the 15 minute rule work better than trying to declutter your entire house in one weekend.

4) Decluttering is an ongoing process and it’s important to keep an eye on what’s coming in.

5) Don’t be too ruthless, you might actually regret getting rid of every single thing your parents or grandparents left you when they died. By the same token, you don’t need to keep everything.

One thing I’ve always had trouble getting rid of is toiletries. Goodwill won’t take them, but just because I wasn’t crazy about the scent of a lotion doesn’t mean it should be tossed into the trash. I’ve found that women’s shelters will take opened shampoo, lotion, and makeup, as long as you don’t include that neon eyeshadow you’ve had since Madonna burst onto the scene. The items in the photo above were in our bathroom cupboards, and most of them were perfectly usable, but for one reason or another I wasn’t using them anymore. So I included these bags with some clothing that I donated to My Friend’s Place in Hollywood, an organization that feeds and clothes homeless youth. If you have nearly full bottles of shampoo or lotion, I’m sure a similar organization near you would be happy to take them.

As for the empty or nearly-empty bottles and jars, Origins will accept containers of any brand and recycle them for you. Just drop them off at any store location.

Used tennis shoes are another item I’ve always wondered if there was any alternative to tossing in the trash. I’ve been bringing mine to the drop off centers at Nike Reuse-a-Shoe. They take even the most broken-in old running shoes and turn them into basketball courts, playgrounds, and sports tracks. And they don’t have to be Nike brand! So your old sneakers never have to go into the landfill again. Click here to find a drop-off center near you.

Naomi at Simpler Living wrote a great post called Eight Ways to Share Your Stuff with the World, and if there’s anything you’d like to find a home for but you’ve run out of ideas, check it out. She covers everything from books, magazines, and CDs to clothing, sports gear, and furniture, along with those miscellaneous items we all have. I’m sure you’ll be more inspired to get rid of your things when you know they’ll be useful to someone else.

Are you spring cleaning? Do you have any tips for getting rid of stuff you no longer use? Please leave your thoughts in the Comments section.