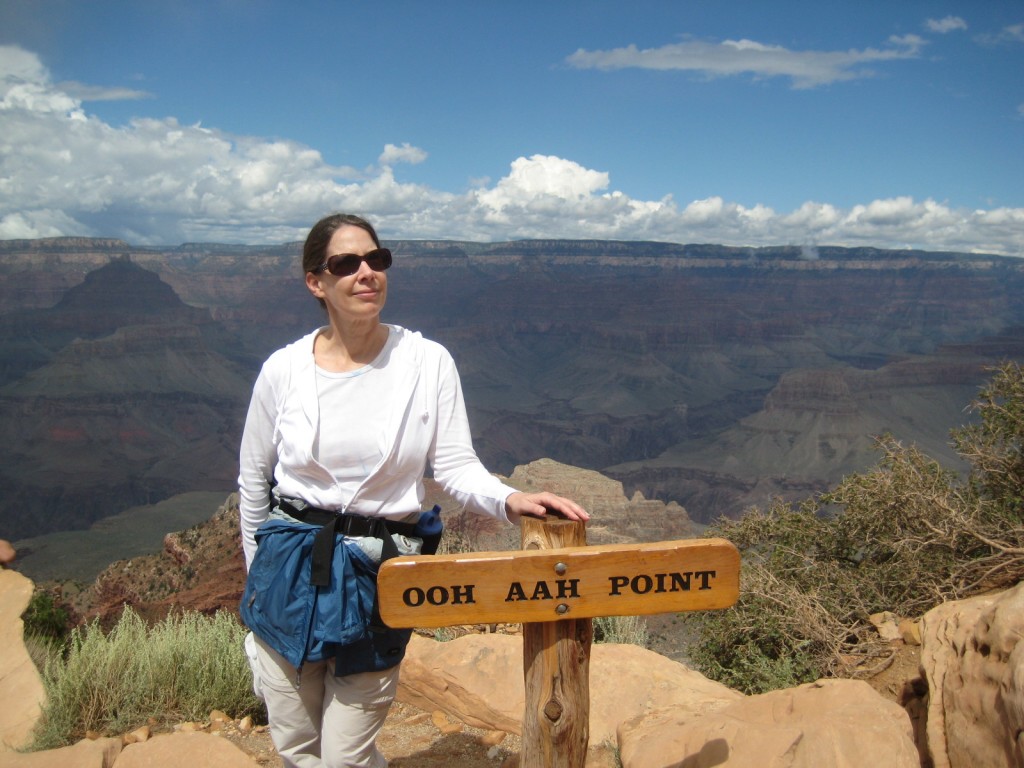 This photo was taken along the South Kaibob trail in the Grand Canyon. Judging by my last three posts, you’d think I was vacationing all summer, but in actuality I took just two short vacations – one to visit my parents and this one with my husband.

We had intended to go camping in a nearby canyon with waterfalls in an area that is described as Shangri-La, but unfortunately we were rained out and had to give up that plan. On the upside, since it was raining at the Grand Canyon, we were able to get a room at a very reasonable price. The next day, after the morning started out cloudy with light rain, the afternoon cleared up and we were grateful to experience one of the most spectacular hikes of our lives. The scenery is simply indescribably awesome, and photos can’t possibly do it justice. I actually wept at our first glimpse of the canyon. We enjoyed another fabulous hike the following day, as well as taking a tram along the rim to several lookout points, and watching the sunset from a spectacular vantage point.

Though it wasn’t as frugal as it would have been had we been able to camp, it was still a very non-consumer vacation, since the only money we spent was for gas, food, and lodging (and a few drinks). We didn’t need to purchase anything for the trip, were able to borrow two large duffel bags to carry all our camping equipment, and easily did without any souvenirs.

Hiking into the Grand Canyon was something we’d both wanted to do together, and now we’re excited to return next year and camp where we originally intended, as well as hike all the way down into the floor of the canyon and stay at the famous Phantom Ranch when we’re both in a little better shape. At ten miles each way, it’s not for wusses.

Now that it’s officially fall, I’m more than ready for an end to the record-breaking temperatures we’ve been experiencing. But with a forecast of 99 degrees tomorrow, it looks like it’s going to be a little while. Is it fall in your neck of the woods yet? What non-consumer activities have you been enjoying to celebrate? Please share in the Comments section.