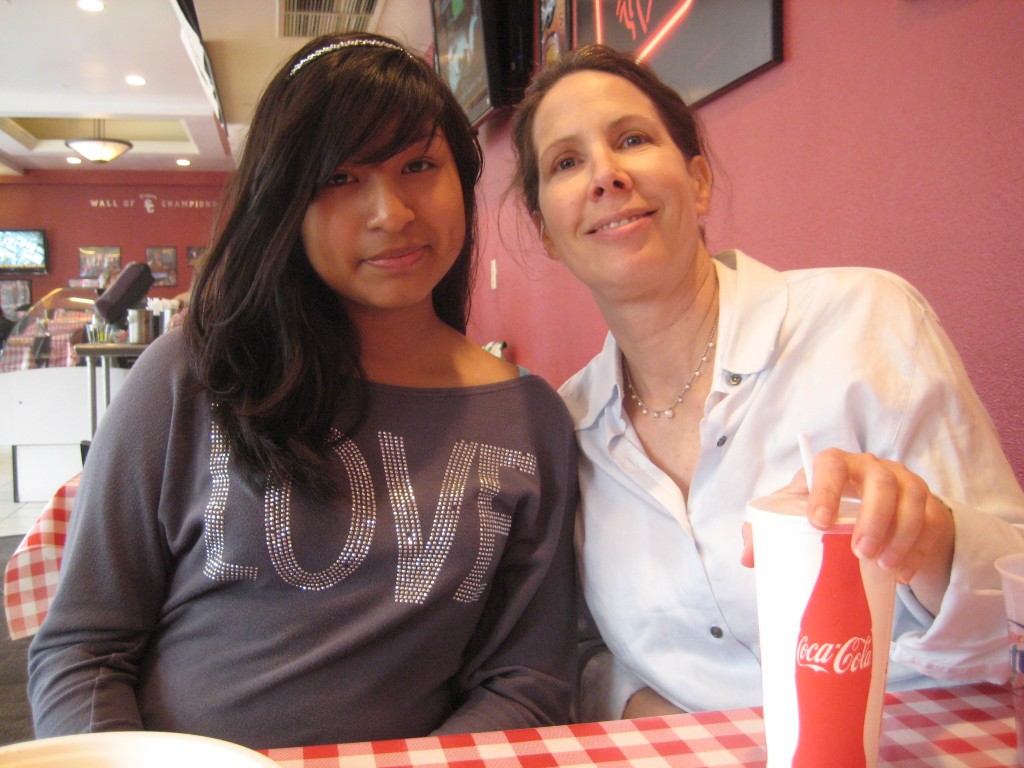 It’s been more than a month since I decided to take a blog hiatus, but the combination of disinterest and dread I’ve felt at the idea of writing a new post is telling me that I need to either: take a longer break, stop blogging entirely, start a new blog, or change the subject. I haven’t been able to come to any conclusions about what direction I will take. But the fact is that I just don’t have that much to say about non-consumerism anymore.

I think there are a lot of reasons for this. First of all, I should tell you that the photo is of me and my “Little Sister” Maricruz, and spending time with her is just one of the reasons I don’t have as much time for blogging. I spend one full weekend day with her, and since I’ve been working long hours the past several months, that is a significant portion of time. Also, I hope this doesn’t sound disrespectful to her, but she’s sort of a “project” that has to some degree replaced my enthusiasm for  the project of Buying Nothing New. We have a great rapport and I adore her, and our relationship is having a huge impact on both of our lives.

The amount of time I’m working is another factor. When I started the blog I was working more at home and less at an “away” job, and now that I’m often working 50-60 hour weeks, blogging usually isn’t what I want to do with my “me” time.

Which leads to what I DO want to do with that time, and one of the things is unquestionably writing, but I feel that I haven’t given the time I need to my fiction writing and I want to be doing more of that.

Finally, I’ve realized that non-consumerism has become second-nature to me. Every time something comes up that I need, I seem to easily find a way to borrow, trade, or buy used. Just a few recent examples include buying four used skirts on ebay after not buying any new clothing since I joined The Compact over three years ago, as well as used rollerblades for Maricruz that cost a fraction of what they would have been new and fit her perfectly. We’ve also continued to trade baked goods for produce and airport rides for chocolate, and I’m putting out the word to borrow a beach umbrella since we only need it for one day. To top it all off, I am the recipient of a mother lode of free stuff whenever people find out that I don’t buy things new. I have an amazing wardrobe for a person who hasn’t been in a department store except to buy lipstick for over 1000 days and counting. It’s simply easier than ever to be a non-consumer these days, especially with ebay, craigslist, and freecycle.

Having said all that, there are things that I want to share with you and I don’t want to give up blogging entirely. I’m just not sure how often I’ll be posting, or even what I’ll be posting about. Part of me wants to write about my experience with being a Big Sister, but I’m ambivalent about it because of feeling protective of Maricruz’s privacy. She’s not really old enough to understand what a blog is well enough to give permission.

So I will be back, and I’ll have more time in just a few weeks, but as for what I’ll write about, it’s an open question. I do know that I want to share photos of the gorgeous new potted plants we inherited when my parents moved to Idaho, do a NOVICA giveaway with a gift card they provided me, post some Thrifty Threads submissions I’ve received as well as model some of my own, and continue the conversation with the readers I’ve been so lucky to “meet.” Yay, readers!

How’s your summer going? Please share any non-consumer activities you’ve been enjoying, along with what you’d like to see on the blog in the future, in the Comments section. Don’t let those summer days slip away without making a point of lazing, hammocking, and watermeloning. Making up words is one of my favorite things about blogging.