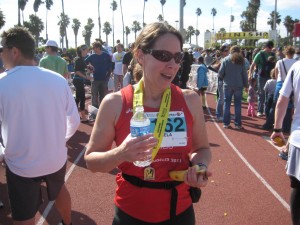 This is one of those posts that I’ve been meaning to write for a long time and for one reason or another it kept getting pushed. First it was lack of a picture, then other details, and recently because there was simply too much to tell. So I’ve decided to turn it into two posts. This is part one.

This photo was taken immediately after I finished the Santa Barbara International Half Marathon last November. It was a perfect day and all that mattered to me was that I completed the course and had a fantastic time. I learned that, as usual, none of the things I worried about came true (that it would rain being uppermost in my mind that day), and the fact that it took me well over 3 hours meant nothing to me. What was important was that I decided I would do something, and I did it.

Last July I came upon information about the event, and decided on the spur of the moment to enroll. I should emphasize that I am NOT a runner. I love to walk, hike, and do yoga, along with other activities like kayaking and bicycling when I get the chance, but running is just not something I’ve ever warmed up to. But I decided I wanted to do it for two reasons: because I went to undergraduate school in Santa Barbara, and knew the course would be gorgeous. And because it’s the best way to earn a lot of money for one of my favorite charities: AIDS Project Los Angeles, which directly helps people living with AIDS.

So I started training with a group on Saturday mornings in July. The alarm went off at 5:45 so that I could get to the meeting place by 7am. In case I’ve never mentioned it, I am NOT a morning person, and this schedule interfered severely with my lifestyle. My husband and I like to stay up late, especially on weekends, watching movies, drinking, and talking, and this training put a severe kink into all of that.

In fact, the training was fun only in the sense of meeting new people and having a mission, but I never really learned to like the running itself. I remained resolutely not a runner. By the time the whole event was over, I couldn’t wait to get back to my previous non-running lifestyle, and I knew my husband felt the same whenever he tucked me in bed at 9pm with a look of disappointment on his face. It’s not that he wasn’t supportive and didn’t applaud what I was doing, he just didn’t like giving me up so early in the evening.

From a non-consumer angle, I was able to get away with purchasing only a pair of running shoes, a jogging bra, and a specific watch for training (which I donated back to APLA after the half marathon to give to another runner). The shirts came from the organization, and my mom sent me a “skort” that she had bought for herself 20 years earlier when she was a runner that still had the tags on. That was really all that was necessary, since running isn’t an equipment-heavy sport.

Even though running a half marathon wasn’t necessarily something I’d always wanted to do, it turned out to be a spectacular event that I am so happy I participated in. If you have ever thought of it, I highly recommend it. You’ll learn so much about yourself and the way your thoughts try to sabotage your goals, and how you can really do almost anything you set out to do. It’s a fabulous confidence-booster, as well as being such a great way to raise money for one of your favorite charities. There are 10Ks, half marathons, and marathons that raise money not only for AIDS, but for cancer, diabetes, and many other causes now. I know you won’t regret getting involved at this level.

Next week I’ll tell you more about the event itself, and why I’ve resolved to volunteer at the next one, as well as be a long-distance walker of several more, since the running just isn’t my thing and I’d like to save my knees for several treks I have on my list.

Are you a runner? Have you ever done a half marathon, or even a marathon? Tell us about it in the Comments section. I’d love to hear your stories.