This is very unusual for me, a post with a lot of photos!

We lived in this house for five years before we did one speck of landscaping. This first photo is from the day we planted the first plants in the front yard, after my husband had built the tile walkway and done an entire drainage system around the house . My parents helped us clear the front yard of the bits of old grass, turn the ground and add Amend to it. Then we planted grasses along the windows and clover around the tree. So this isn’t really a “before” photo, but it’s as close as we’ve got.

I made this simple plan after walking around the neighborhood, taking photos of plants I liked and looking for them at the nursery. I learned some of the names and got ideas for plants that would be simple to keep watered without a sprinkler system and without a lot of rain, since we live in Los Angeles. The reason I’m doing this post now is that if you live in the southwest, this is exactly the time of year we started these first plants, and I think it’s ideal to plant before the rainy season. Even drought-tolerant plants need a lot of rain their first year and so nature takes care of things. In the spring, you’ll already have blooms if you plant some of these choices. We stuck mostly with native grasses and sedum, which is a ground cover similar to iceplant.

Here are some photos of how the front yard looks now, three years later. It’s still not quite finished, but it’s come a long way.

These plants were planted just a year ago. From the left along the front, the plant with orange flowers is called lion’s tail, next to it is flax, then sticks on fire and a couple of succulents, with two lavender bushes behind. 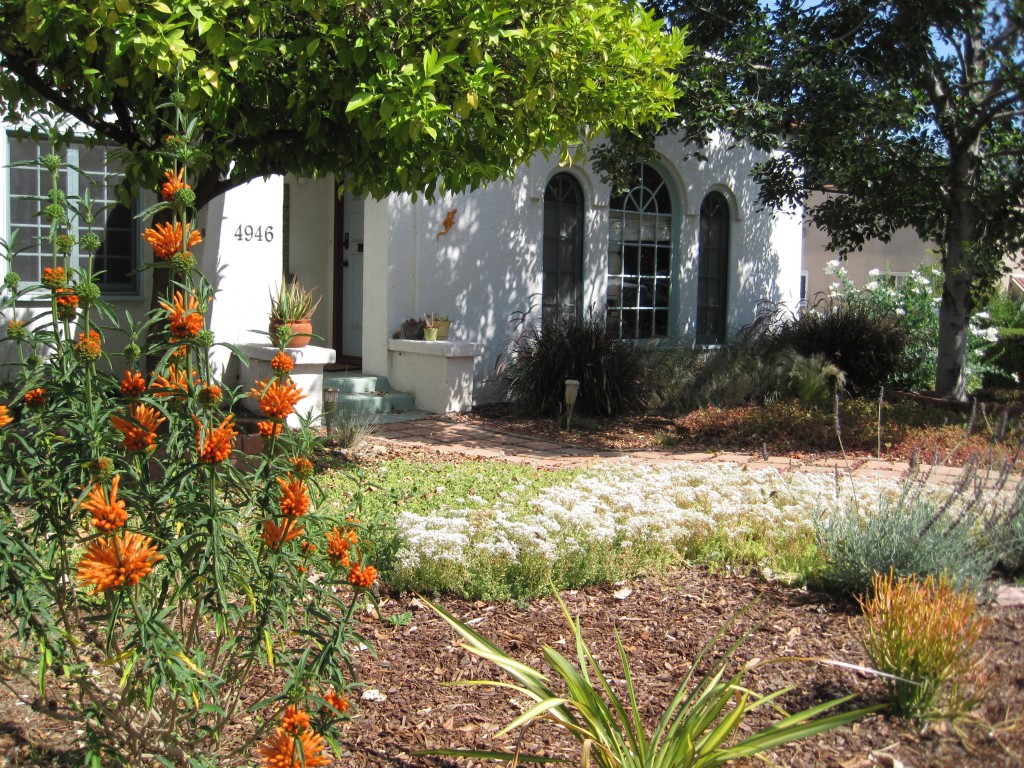 The ground cover behind these plants in the foreground with tiny white flowers growing out of it is a type of sedum called Brevifolium. I absolutely love it, it’s very Suess-like, it grows quickly and fills in, and it’s very hardy. 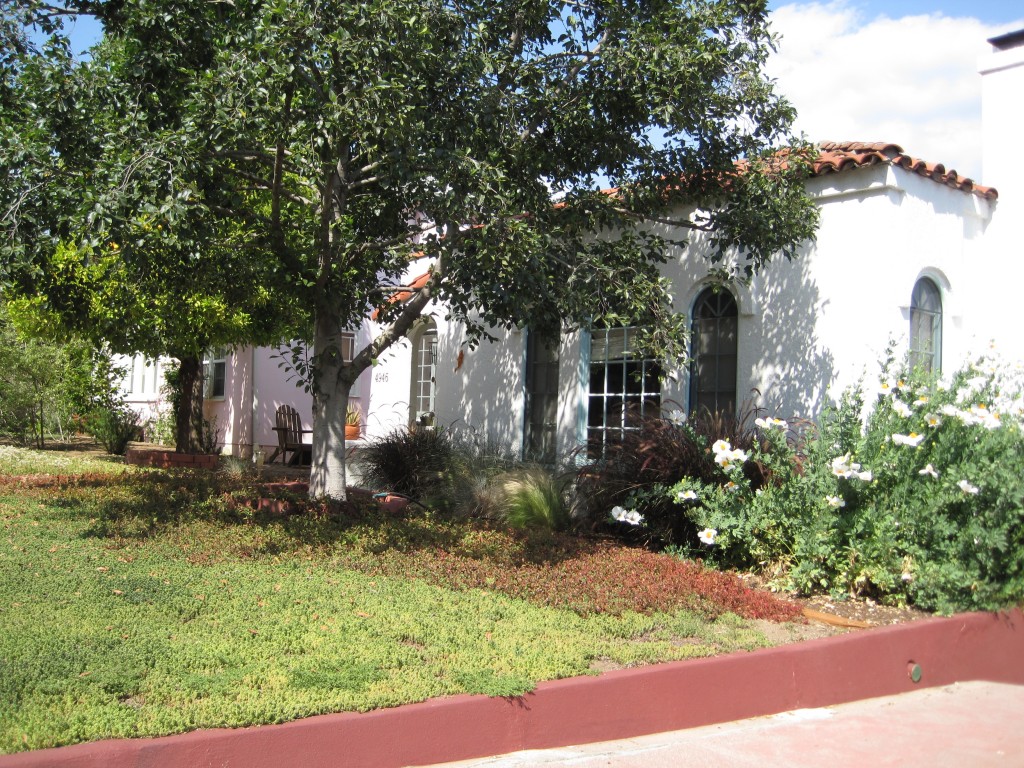 Along the front of the window are various native grasses starting with fountain grass, oat grass, and ending with the plant with white flowers called the Matilija poppy, or Romneya coulteri. Around the tree is clover, with more Sedum Brevifolium in front. The tree was already here when we moved in, we’re not sure what it is. The other tree is a rare orange tree that the previous owner imported from South America (!!) which has terrible bitter oranges. Next year a friend is going to help me make them into marmalade. Way off in the back behind the orange tree is rosemary, which is the closest thing to a weed I’ve ever seen. I don’t think rosemary dies once it starts growing, and it can get to be a very large bush. 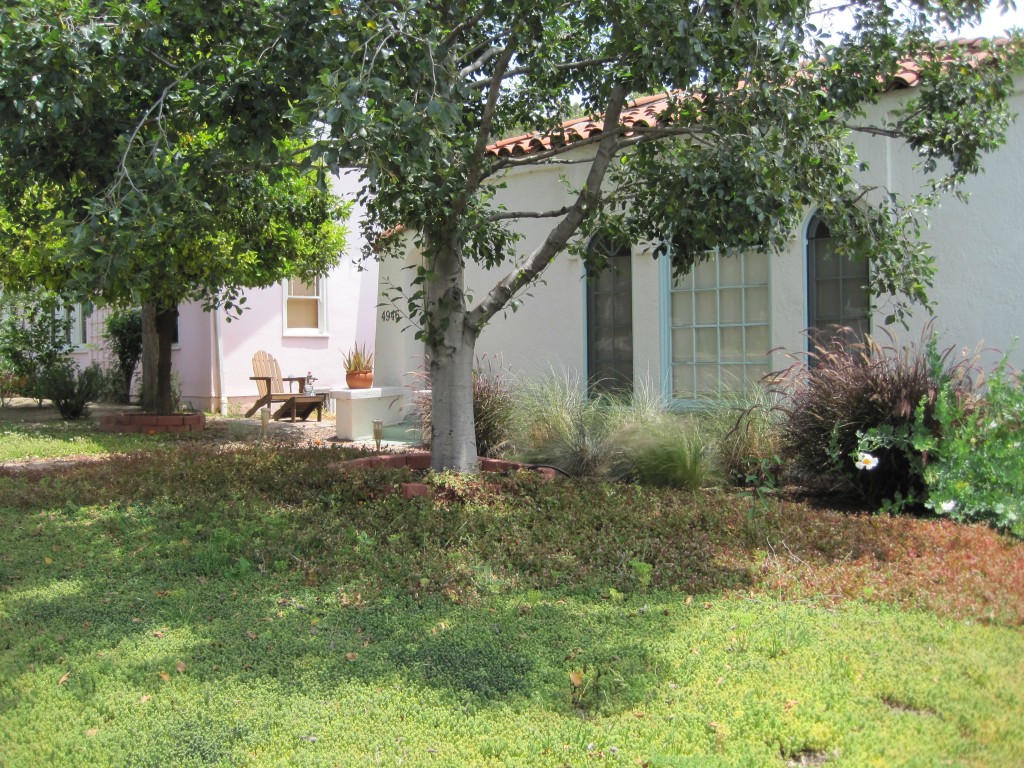 These photos were taken in June, a very pretty time for our yard, especially after such a rainy winter.

And here are some of the blooms up close: 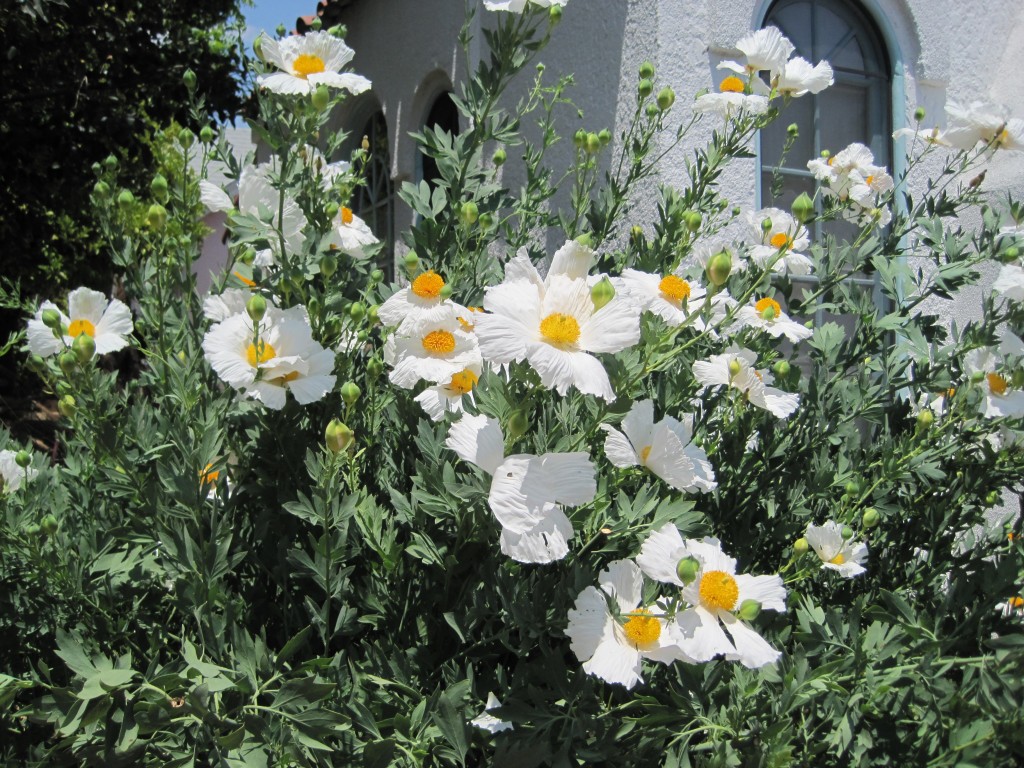 The aforementioned Matilija poppy, my very favorite. This grows so fast that we had big blooms like this the first spring, just five months after we planted it. It grows like a weed and needs almost no water. I highly recommend it for hillsides, but it will try to spread so it’s best along the side of a yard and next to a wall or driveway that will stop its growth. It only blooms like this for two or three months, but I think the plant itself is quite pretty. 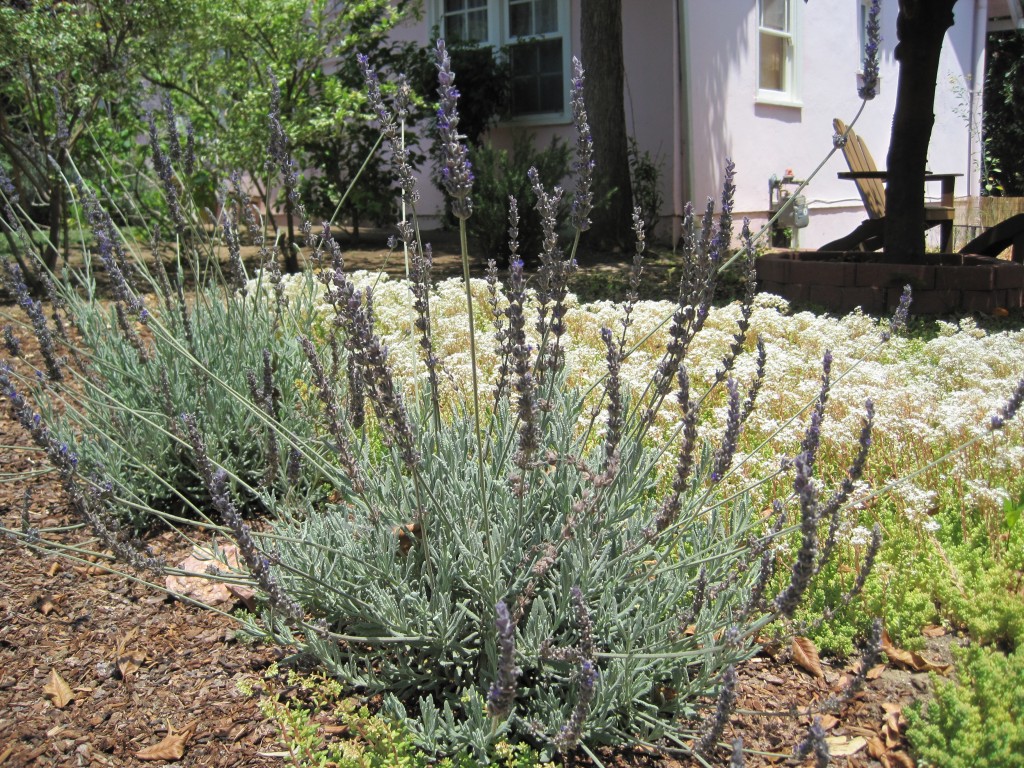 This is Goodwin Creek Lavender, or Lavandula, but almost any type of lavender is easy to grow and needs very little water. I love watching the bees buzz around this one, and it smells wonderful.

And this is Lion’s Tail. This was another plant that grew quickly and bloomed the first spring, this April, after being planted last November. It’s a hardy bushy kind of plant.

Before this project, I had only grown a few basil and other herb plants. I am most definitely not a gardener, by talent or inclination. So if I could do this, so can you! I recommend taking photographs of plants or flowers you like and looking them up online or going to a nursery. People who work in nurseries are usually happy to help you and give you suggestions for drought-tolerant plants that will work in your yard. After the first day with my parent’s help, I’ve done the rest of it myself with a bit of digging help. And I lost a few plants along the way, especially before I tested the soil, which I highly recommend. It was nitrogen deficient and needed an additive.

I don’t know the total cost, but I’m estimating around $500 with all the plants, ground cover, and Amend. I could have done it even cheaper if I’d kept an eye out for free plants on freecycle or from friends, recently a woman in my neighborhood planted her whole front yard with secondhand succulents. I also could have saved a bit by doing all my shopping at Home Depot, but I bought mostly the Amend and some ground cover there, and gave my business to two different nurseries that offered so much advice and assistance with my project.

Many of these plants attract a lot of bees, which makes me very happy, especially the clover and the lavender. I’m not an expert, but I think it’s at least 90% native, possibly even close to 100%. Here’s a list of most of the plants in our yard and a few other popular drought-tolerant choices:

If you get these plants in by Thanksgiving, they will do great, and you’ll have a beautiful yard next spring. And if you live in the north, east, midwest, or anywhere it’s already winter, I’m sure this seems insane, and I apologize and promise to do a post more likely to be relevant to all of you next time.

Do you have drought-tolerant plants? What are some of your favorites? Please leave your landscaping tips and any questions about our front yard project in the Comments section.