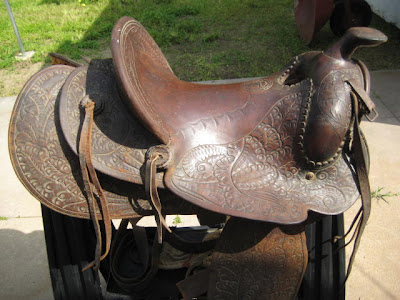 I sold this saddle on ebay for $200! Woo hoo! I have finally broken the whammy and put a dent in the formidable $5000 goal I’ve set for myself this year when I answered Non Consumer Girl’s clutter into cash challenge. She’s decluttering and aims to raise $5000 this year. I joined her because I thought the cash would be an added incentive for me to really go through my possessions and get rid of some things I no longer use or need.

But I’ve written previously about my ambivalence towards decluttering, especially my problem with giving up items that have sentimental value to me. And boy this saddle was loaded with memories. Giving it up was like ripping out a piece of my girlhood.

I’m taking a risk here in admitting that yes, I did have a horse when I was a girl. Certain of my friends are very envious of that fact. But I was not a little princess who was given everything she wanted. I was a horse-freak, read every Marguerite Henry book she wrote, drew horses everywhere and on everything. And at the age of 5, I started saving every penny that ever came to me – allowance, checks from my grandparents, everything – and put it in a savings account. Between the ages of 5 and 10, I only spent my money one time that I remember, on a $3 leather purse. And it was a BIG decision.

By the time I was 10, I had saved $300 and started asking my parents about getting a horse. Our neighborhood wasn’t zoned for it, and boarding was out of the question financially, so it looked like it wasn’t going to happen. But then some friends of the family offered to let me keep a horse in their stable to keep their daughter’s horse company. I started looking for a horse and ended up being given a retired gymkhana showhorse who’d been put out to pasture. I spent my $300 on this saddle and other tack.

I had my beautiful horse until I went away to college and no one rode him anymore. He was an expensive pet so my parents gave him to a family with children. Between the ages of 10 and 15 (when my horse-craziness morphed into boy-craziness) I rode him almost every day. He was a tall chestnut with a white blaze and he loved to run. He was so fast we would leave any other horse in the dust, and he was so sure-footed he never stumbled. He could turn on a dime, back up as long as you wanted him to, and even liked jumping. He was an absolute blast. Most of the time we rode around bareback with just a thin pad, but on all-day trips, I would use this saddle.

When my parents gave away the horse, they put the saddle into storage. I always dreamed I would have a horse again someday and use it. When my husband and I bought our home 6 years ago, my parents (rightfully) made me take all my childhood possessions, including the saddle, now that we had storage space. So the saddle became the bane of my husband’s existence as he moved it from spot to spot in the garage every time he reorganized.

Since my Buy Nothing New year has also turned into a year of Decluttering, I faced up to the fact that this saddle had to go. I cleaned it up and hauled it to the Equestrian Center to find out what they thought it was worth. I was dismayed to learn that the saddle had been in storage for so long it was no longer safe for riding. It had small cracks in the leather, amongst other issues.

I felt really guilty and tried to donate it to The Autry Museum of Western Heritage. They found they already had a saddle like it in their collection, so thanked me but turned down my offer.

So I finally listed it for $50 on ebay last weekend. I was hoping someone might want to use it for decoration. I ended up getting $200 for it from an old man who wanted to keep it in his living area, to remind him of his younger riding days. I couldn’t have asked for a more perfect home for my girlhood relic. And I really can’t believe he paid $200 for it.

I feel good about letting the saddle go, maybe the new owner will get more pleasure out of it. And I feel GREAT about the $200. I get to cross it off my to-do list. And best of all, I’m not forcing my husband to deal with my STUFF. He mused about dancing a little jig in the area where it had last been stored, and we raised a toast to the saddle that evening.

What treasures from the past are you holding onto? What are your decluttering challenges? Please share your stories in the Comments section.