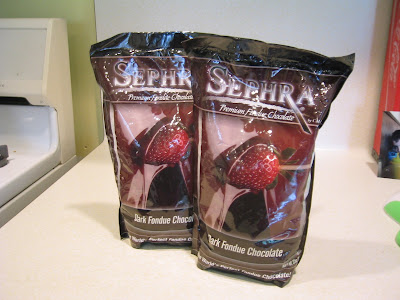 Check it out- 6 pounds of FREE CHOCOLATE!! Enough for 6 batches of Toll House cookies. Wow.

I know I’m coming to this phenomenon late. So many people have been raving to me about Freecycle, and now I’m a convert. I registered a couple of weeks ago and posted a WANTED: CLOTH NAPKINS ad. I didn’t get any responses and that was that.

But then about a week ago, I opened one of the “digests” that lists all the recent ads, and how could I miss the one that said “OFFER: FREE CHOCOLATE?” My pupils dilated, I started salivating, my heartrate probably rose. I’m pretty much a chocolate freak.

I responded with a short essay about “why I should be the one to receive the chocolate” and got a response that it was already taken. After all, the ad had been up for over an hour. But a couple of days later, I received an email asking if I still wanted it because the other person had flaked out. Of course I still wanted it!

The address was right on my way home from work, so it was super convenient. And the bags are filled with chips- just a little flatter than regular Nestle’s chips. I’m sure they’ll be fine for baking, I’ve already tasted them. I usually get those bags at the market for about $2.50, so I saved about $15. But it’s more fun because she was moving and they would have been thrown out if she hadn’t used Freecycle.

On that same digest, I saw a WANTED post for magazines. The girl was doing a scrapbooking project for an art class, so I was motivated to go through about 20 magazines and leave them out for her. I’d been meaning to start going through the stacks of magazines anyway, and doing it for someone else made me get to it right away instead of putting it off. Plus they’re not going in a landfill!

It’s a great win/win, and I love those. I received free chocolate and got rid of magazines that were gathering dust. What are your best Freecycle or Craigslist scores? Please share in the Comments section.