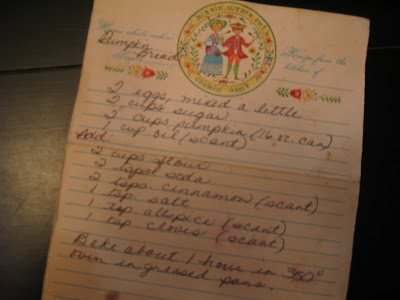 When I posted this recipe card the other day, I used it as an illustration of how our favorite recipes become so precious to us, especially the ones handed down over generations and the ones that always elicit “oohs” and “aahs.” But a reader asked if I could post the recipe, since it’s a little hard to see on the photo.

This is one of my oldest recipes. It wasn’t handed down, I found it in one of those Women’s Clubs collections of favorite recipes, but I’ve been baking it since I was about 13. It’s definitely in the category of recipes that elicit “oohs” and “aahs,” so long as one is a pumpkin fan, of course.

The only trick I’ve noticed is that the dough is so moist and dense, that if you bake it into one large loaf, you have to bake it long enough so that it gets crusty on the top, otherwise the inside might not have cooked through. If you use the 4 small loaf pans instead, you won’t have that problem, and they’re great for gifts.

Bake about an hour at 350 degrees in greased and lightly floured pans. (1 large loaf may actually need a little more than an hour, and four small loaves maybe 35-40 minutes- I keep an eye on them- when they’ve risen and lightly browned, they’re usually done. Cool on a rack.)

“Scant” means to err on the side of too little rather than too much. And I usually mix all the dry ingredients together before adding them to the pumpkin mixture, so that you won’t be left with bites of cloves, or worse, baking soda.

And a word of warning: This is so easy and delicious, but it’s hardly low-cal, so be careful if you’re tempted to eat it all in one sitting.

Let me know if you try the recipe in the Comments section. This is one of my favorite holiday gifts to make.