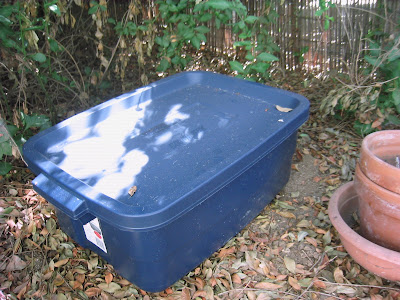 My baby steps challenge for July is to start composting. I wrote about my doubts and lack of knowledge a few weeks back, and you can read that post here. But armed with a lot of advice from my readers and a bit of research, I officially started composting last weekend.

I picked up this bin from the city of Los Angeles for $5. It’s actually a worm bin, so it didn’t have holes or any kind of drainage in the bottom. I’ve opted to wait on adding worms, and see if worms find their way into my bin as some people have said might happen. I just don’t really love the idea of paying for worms, and having to touch them. Call me squeamish.

I stuck pretty closely to the composting method outlined by The Frugal Girl. Her bin is twice as large, but there are 6 in her family and only 2 in mine. If it fills up too fast, I figure I’ll either get another one or go ahead and buy worms. A few people have advised me that vermicomposting – the worm bin method – works much faster.

This bin is out behind our garage and is mostly in shade. I cut holes in the bottom, although I was advised by one person to cut out the entire bottom of the bin. I don’t think that’s practical with such a small container. I want to be able to turn and dump the compost easily.

I’m still working on getting an interim container in the kitchen for scraps on their way to the bin. My Pillsbury doughboy cookie jar isn’t working out as I’d hoped because the opening is too small. I’m skeptical about our Goodwill because the housewares section is sorely lacking, so I’ll have to hit the garage sales this weekend and see what I come up with. I want it to look nice enough to sit out on the counter, but be large enough that I don’t have to empty it every single day.

As far as where the bin is located, I had conflicting advice on that. Some people said part sun/part shade and others said complete shade. Maybe it depends on the worm thing. This bin will be mostly in shade, the sun that’s hitting the bin in the photo is in the morning, and only lasts a couple of hours at the most.

If YOU want to start composting, I recommend looking up your city’s Department of Sanitation for any bin giveaways or sales. They also have tutorials available online. Otherwise, all you have to do is find or buy a Rubbermaid container and drill some air holes into it. Secondly, I would consult this post at The Frugal Girl, which also references You Grow Girl. And finally, I would read the Comments section of this blog from my original post about composting here.

Believe me, if I can do it, you can do it. And by the way, you can do the vermicomposting on a patio, in a garage, or even inside your house in a closet or pantry. I don’t know if I would do that, but I’m just passing along the information.

Do you already compost? Do you have any additional advice for me or my readers? Please let us know in the Comments section. And a great big THANK YOU to all the good folks who participated in my composting education.