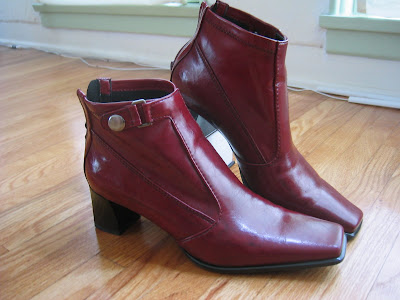 I feel a confession coming on…

Since I joined The Compact and started writing this blog, I’ve learned so much about simple living and frugal living from visiting other blogs. But sometimes I feel a little hypocritical about associating myself with the frugal lifestyle, and I might hesitate in calling myself a Frugalista. I’m not really sure where I lie on the frugal/spendthrift continuum. Because there are some things I really splurge on (even while doing The Compact), they’re just mostly not STUFF.

For example, I’ve read on several frugal blogs that they don’t take vacations far from home. Well, travel is one of the passions of my life and I have always done without in order to have funds for my next adventure. When I finished graduate school, I sold my car so I could take a month-long train trip through England and Scotland. It was marvelous. And I never regretted getting rid of my pint-sized Toyota Tercel. It all worked out because when I came back from England, I moved to New York City, where I didn’t need a car. I don’t know if selling a car when you don’t even own a stereo system and using it to fund a European vacation would be considered frugal, but it certainly highlighted my priorities.

Another example is my spa habit. I’m a real water-lover: I love swimming, snorkeling, kayaking, wading, floating, and taking long showers and baths. I find water very calming, and at the same time invigorating. So one of my big splurges is going to the spa for a facial and using all the facilities beforehand: the sauna, the jacuzzi, and the wetroom. I only do this 3 or 4 times a year, but it’s not something I imagine some frugal lifestyle people would approve of. But for me, it’s part therapy, part indulgence, part beauty routine, and I wouldn’t give it up unless absolutely necessary. I’m also hoping those facials will save me money on skin care supplies in the future. Plus I rationalize this treat by reflecting on how spas and bathhouses are de rigueur in many parts of the world even for common folk, particularly in Asia and Eastern Europe.

I used to splurge on books and I honestly don’t think that needs any rationalization because reading is such a huge part of my life. But for the past 3 or 4 years I’ve mostly been buying them used or going to the library. I will buy a new book occasionally, especially if it’s by one of my favorite authors or I want to support a friend. But I still usually wait for the paperback.

Occasionally (pre-Compact) I’ll splurge on a gift for a friend or my husband if I see the perfect thing that I just know they’ll love. I don’t feel pressured to spend a lot of money of gifts for anyone in my life, but I like to get a special treat now and then when it’s something I know they’ll particularly enjoy.

And I have been known to splurge on boots, because I’ve got a bit of a fixation, but I almost always find them on sale. This snazzy red pair in the photo, my current favorite, I bought on clearance for about $50. Their per-wear price will probably drop below a dollar eventually. But I won’t be buying any new boots this year. And I bought those red boots at least two years ago.

So those are my favorite splurges. Does traveling or going to the spa mean I’m a spendthrift? Getting back to the question of where I would place myself on the frugal/spendthrift continuum, if California represented frugality and Maine stood for spendthrift (might make more sense the other way around), I would probably fall somewhere between Arizona and New Mexico. But maybe this analogy is getting too complicated…

I think of myself as fairly frugal, and I have usually done pretty well living on very little money, mostly out of necessity. I think my family would agree: I remember some family lore where one of my brothers bought something for me and the other brother commented, “Well, you know when you buy something for her, she keeps it forever.” I think they were making fun of me a bit. I have one t-shirt that’s so comfortable and perfect for hiking that I’ve been wearing it almost ten years and we can never date a photo because I’m wearing it in nearly every hiking picture. And I remember my mom visiting me once and noticing that I still used some towels about ten or twelve years after she and I had bought them together while shopping for my first apartment. She said something like, “Oh honey, you’re so funny.” But from my perspective, she’s a real spendthrift. Who knows how many towels she’d gone through in that time.

So I think I’m fairly frugal, my family might think I’m extremely frugal (although not cheap because I’ve always given them nice gifts and I like to treat for meals and that type of thing), but I wonder what the frugal community would think of some of these expenditures. Would I have to hand in my membership card if they knew?

I’m trying to be honest about documenting my Buy Nothing New year, and this is something that’s been on my mind lately. Even the name of my blog caused me some immediate regret, when I realized it would be more accurate to call it “My Year Without Buying,” but it was really too late to change it at that point. The technical steps involved were beyond me, and I didn’t want to confuse anyone.

Please write and tell me what you think of my splurges, and I would love to hear what you splurge on. You can leave your thoughts, questions, ideas and opinions in the Comments section. Part of my reason for not buying anything new is to have more money to save, and to spend on things I care about, like travel. And soaking in a hot tub. But I probably already have enough boots.